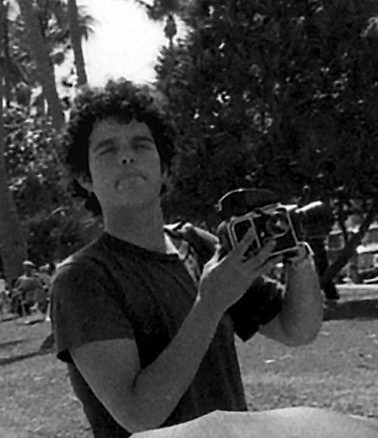 Andrew John Sweet was a young photographer living and working in Miami Beach in the late 1970s. His life and his art were cut tragically short when he was murdered on October 16, 1982. Andy left an extensive body of work that exhibits a level of creative maturity far beyond his years. His photographs are a testimony to a rich but often overlooked period of Miami Beach’s cultural heritage.

Andy Sweet returned home to Miami Beach after receiving a Masters degree in Fine Arts from the University of Colorado at Boulder in 1977, to photograph the old world Jewish culture that then distinguished South Beach. While in graduate school, Andy was part of a small faction of young artist-photographers who were discovering the creative possibilities of color imagery. His beach-ball hues perfectly described the vivid light and lively culture he explored and portrayed, a culture that many others found bleak and pedestrian.

Andy’s aesthetic was as fresh as his colors. He rejected formalist theory and idea-driven imagery in favor of immediate and unmediated responses, of living it up and aligning himself with the people he knew he was privileged to photograph. Andy admired the work of Diane Arbus, and like her he rejected the notion of self-conscious art making. The pure and spirited photograph was what mattered. He knew he was an artist but his aesthetic, his intellect, and his ego required that he conceal this fact in service of achieving the caliber of photograph he desired. Intuitive, but certain, each click of his camera’s shutter release was an affirmation.

He photographed in this way until his death in 1982. He was only 29 years old. Citizens of the City of Miami Beach and Miami-Dade County were shocked and horrified by Andy’s senseless murder. This native son, affable and fun-loving, who, having entered his artistic prime and was becoming well known for establishing an important visual legacy, was abruptly gone. While mourners overflowed from the sanctuary of Temple Emanu-El, The Miami Herald was preparing a tribute about Andy Sweet; it was the cover story in Tropic magazine, its Sunday supplement. Family and friends sat shiva while the police searched for his killers. Time passed, but the Sweet family and their friends kept an emotional vigil. Andy’s photographs, in boxes containing hundreds of large colorful prints, became their focal point. His archive would represent his richly-lived short life. However, if there was any glory in their undertakings, there would be much more anguish.